We are very proud of our school and all of the opportunities that we give our pupils. We value all individuals, pupils and adults, and seek to ensure that everyone reaches their full potential, leaving them ready for the next stage in their learning journey.

We believe that we are an open and welcoming school and have excellent relationships with our parents. This is very important to us.

Latest updates from our school

Pupils in Year 4 enjoyed their cycling session with Liz and Paul from Big on Bikes this week, developing their skills and confidence.

Some children hadn't ridden their bike for a while, and for a few it was their first time on two wheels. 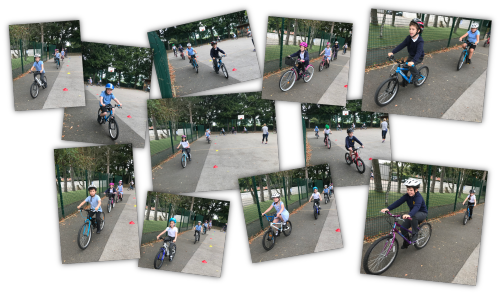 Goliath's Been at it Again!

Our very own Mr Goodburn, aka Goliath of the carpentry world, has had his tools out again, crafting the entrance and exit of the tunnel.

As you can see, the impressive turret structure creates the perfect addition to the mound and was greatly appreciated by the girls in year 4.

As a school, our aim is to develop the little 'extra' that makes our pupils extra-ordinary, and in this week's Achievement Assembly we have certainly seen this as the children were recognised by their teachers for excellence in Trailblazer, Mathematics, understanding their responsibilities as a 'Global Citizen' and other areas of the curriculum.

Headteacher's Special Awards were also presented to pupils for their help at lunchtimes, superb published pieces of writing and for being wonderful role models to others. 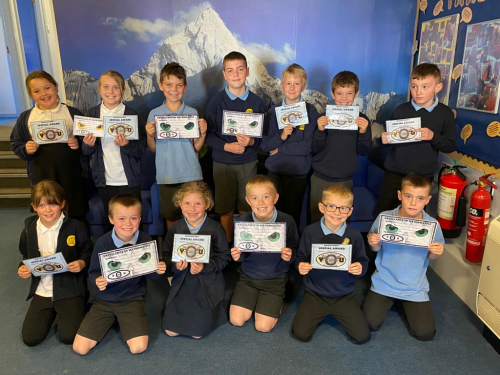 Lower School children entered the wood this week hoping to find Mr Stink but he was not to be found. Apparently, the Duchess is a little under the weather so he's attending to her needs in his new dwelling...you heard that right...new dwelling! 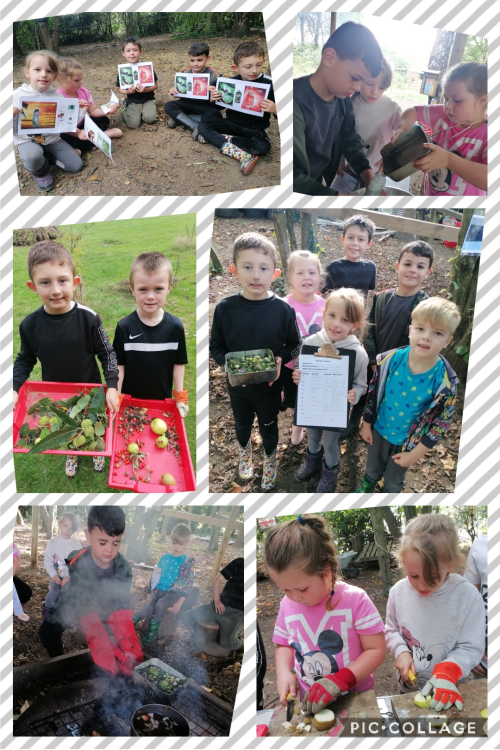 After the children gave him shelter ideas last weekend, he borrowed some of our resources and constructed himself a modest property in a nearby copse. He says he's very happy there and looking forward to seeing the children once the Duchess has recovered. 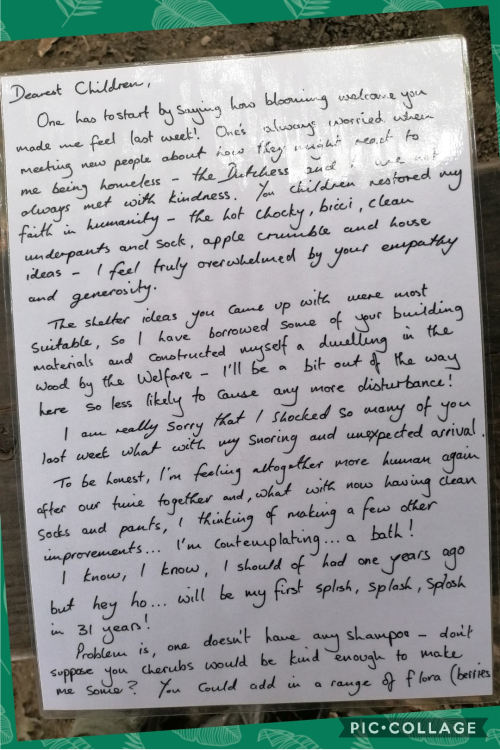 He had, however, left the children a letter. Inspired by their kindness and empathy, he has decided to make more changes to his life starting with...a bath!

For this he needs our help as he has no shampoo - could we make him some? 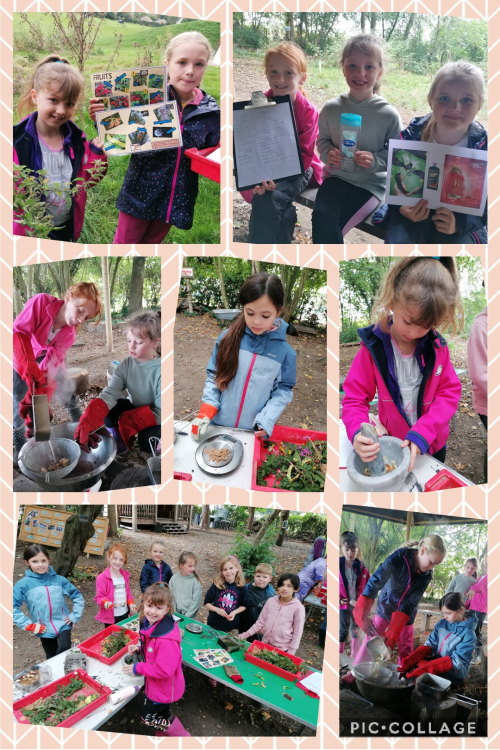 Of course we could! So, donning our DT hats we set to work. First, research shampoos and discover popular ingredients and their purposes. Next, discover shampoo USPs. Then, consider Mr Stink's problems and shampoo requirements.  Following this, select ingredients to solve these problems.

Finally, we gave our products names and developed USPs.

This experience will be used by the children in English where they will write instruction texts. #crosscurriculartastic.

Upper School started with a progression from last week's Sculpture Challenge...complete another sculpture but this time with no verbal communication! Wow...would this even be possible!? The children excelled, finding other ways to communicate, organise and support eachother...some children even said the process was better without talking as it made things calmer and more focussed. 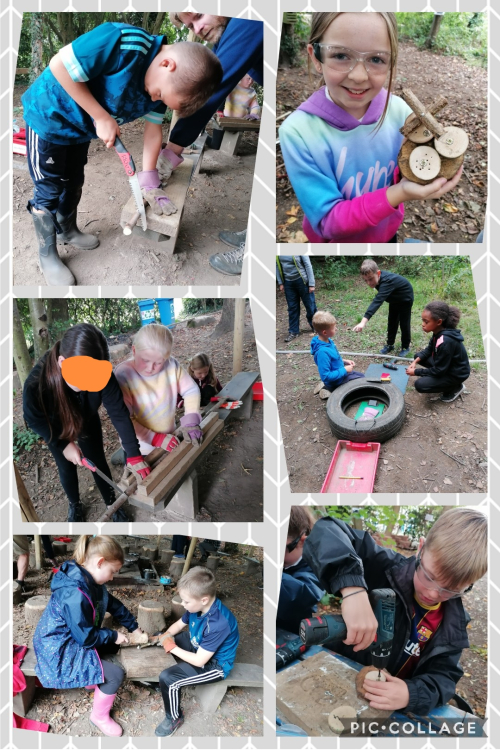 Following this, we cracked on with practicing the tool skills that the children identified they would need when building their bridges.

Oh, and we did have one small breakaway group who completed the roundhouse they started last year...this group was skillfully overseen by our very own Mr Hull, who amazed us all by not breaking any of the tools he was entrusted with!

Joking aside, the children loved their time with Mr H, stating that they wanted to give him a Gold Star for Helpful and Positive Attitude! He was beaming!

Today Team Resilience have blown me away with their partitioning of numbers. We have used the Base 10 to partition numbers in a variety of ways. They have worked collaboratively alongside their peers to work through all the different possibilities!

Here are some of the fabulous children hard at work! 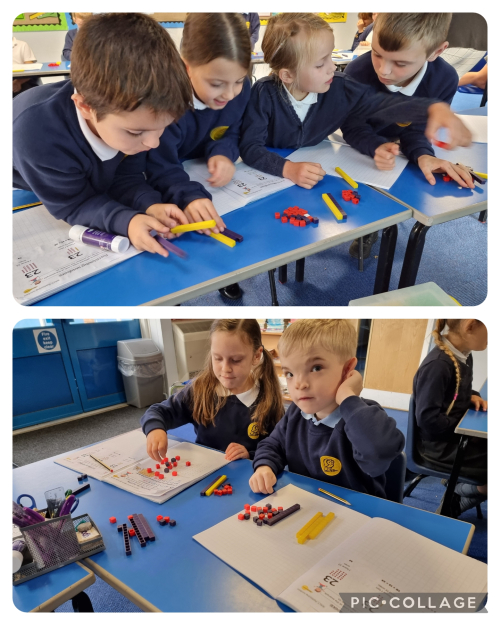 Yesterday, the children were treated to a fantastic drumming demonstration from one of our peripatetic teachers during assembly. It was brilliant to see the children so engaged and excited to hear new music. They listenend carefully to recognise the musical genre of each piece of music. Some children volunteered to help demonstrate the different parts of the drumkit and play some simple rhythms too. 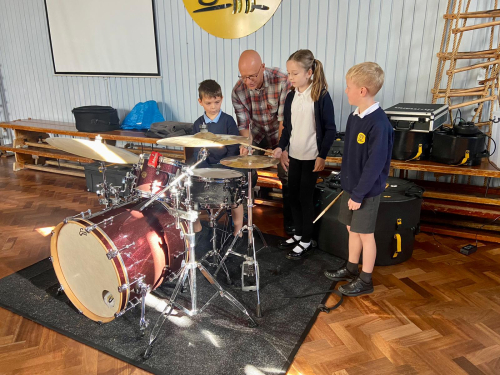 Congratulations to the children receiving certificates in today's Achievement Assembly, particularly those receiving the English Star of the Week awards.

Well done everyone for another really positive week in school. 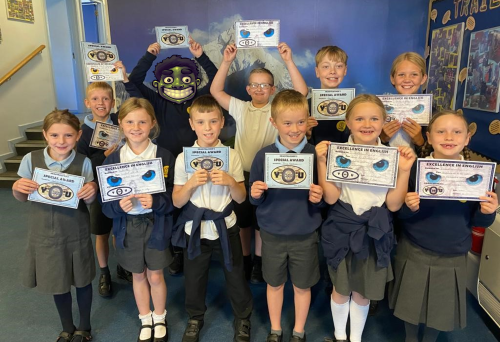 An exciting afternoon in Lower School

We have had a fabulous afternoon in Lower School today! The children have had their first lesson with their new instruments. We have talked about how to look after them and every child has managed to make their first sound!

Keep an eye out over the next couple of days for the instrument loan agreement so that your child can continue to progress at home! You wouldn't believe it...but I'm going to tell you anyway!

Lower School entered the wood this week for their TB session and were shocked and a little disconcerted to hear loud snoring coming from the hay-bale house. 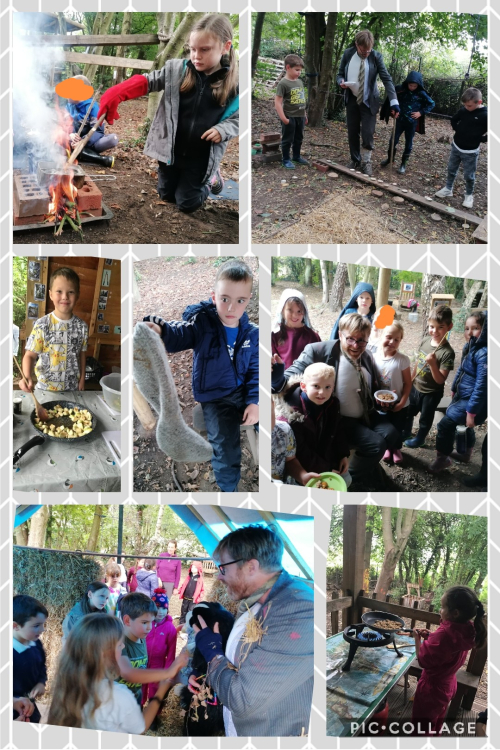 What could this be? A goblin? Zamadeth himself? A wild beast? Fearing for my personal safety, I did the sensible thing and sent a willing child to check on the sound.

The report came back that it was infact a scruffy, slightly whiffy gentleman with a paper bag on his head, fast sleep with his collie dog on his lap!

What to do? Call the police? Evacuate the wood? The brave children decided to do neither of these sensible things, but instead chose to wake him and find out who he was!

Waking in a bit of a frenzy, the man informed us that he was in fact Mr Stink! He tured out to be quite delightful, so the children took him to the fire-circle and gave him a bicci and a hot t'yocci...#kindandcaring. 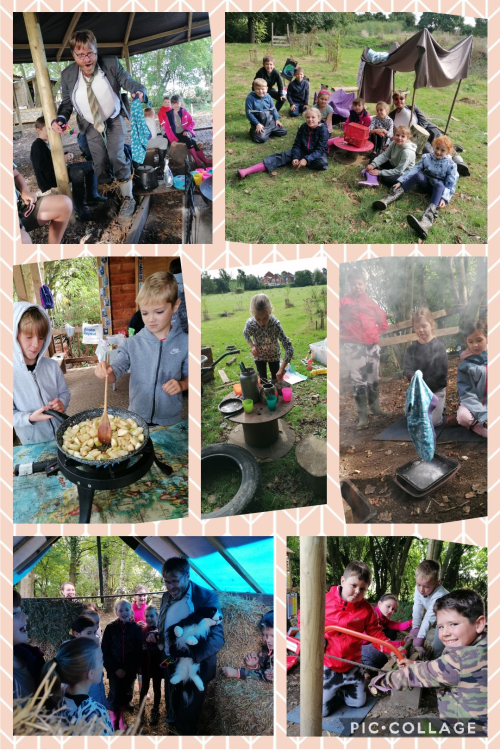 After the excitement died down, we asked him why he was in our wood - we discovered that he was, sadly, homeless.

After telling us all about the trials and tribulations of being homeless, and how he became homeless, the children decided they wanted to help Mr Stink - he was overjoyed at this prospect!

Some cooked him an apple crumble, using fresh apples from our orchard, others designed and built him a house of his own and a final few made a fire to heat water to wash his spare pair of underpants - these were incredibly smelly as they hadn't been washed in 15 years!

The children were phenominal with both Mr Stink and The Dutchess, and the TB staff were blown away by the empathy and understanding the children showed to those suffering homelessness and poverty. 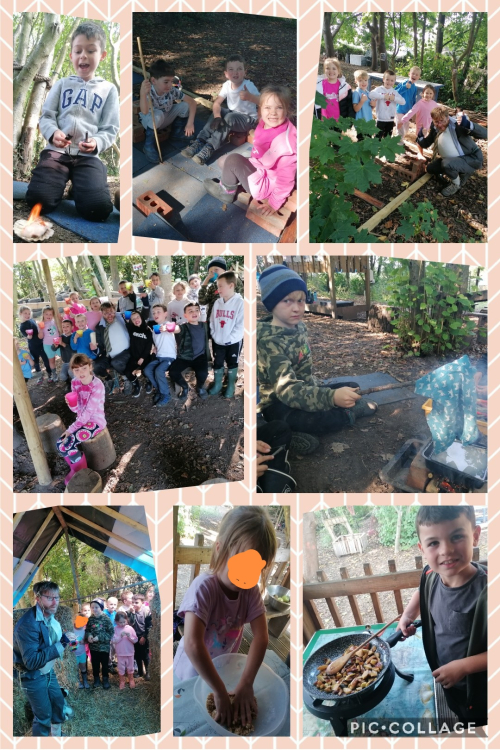 Upper School entered the wood to find a letter from the munchkins - the goblins have been trying to steal their wealth so Flame wants to hide it on the island in the pond. Problem: no bridge to the island. Challenge: research, design, build and test bridges - strongest bridge to be construcred to the island. 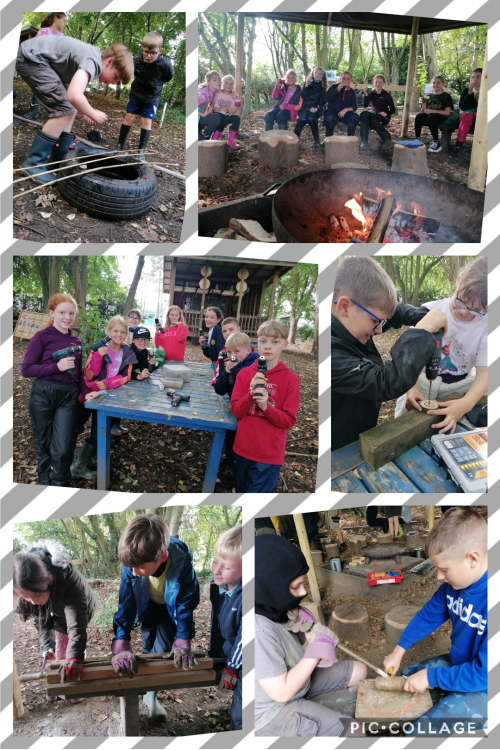 After a team challenge, skillfully crafted to test Collabortion, Communication and Organisation, the chidren examined images of a range of bridges and identified the tools, skills, materials and personal attributes they would need to build their own (links here to the Victorian's topic and Science work back in the classroom). 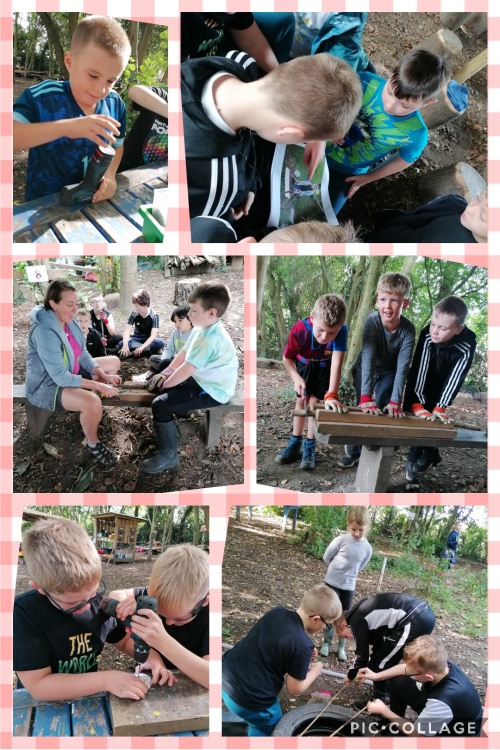 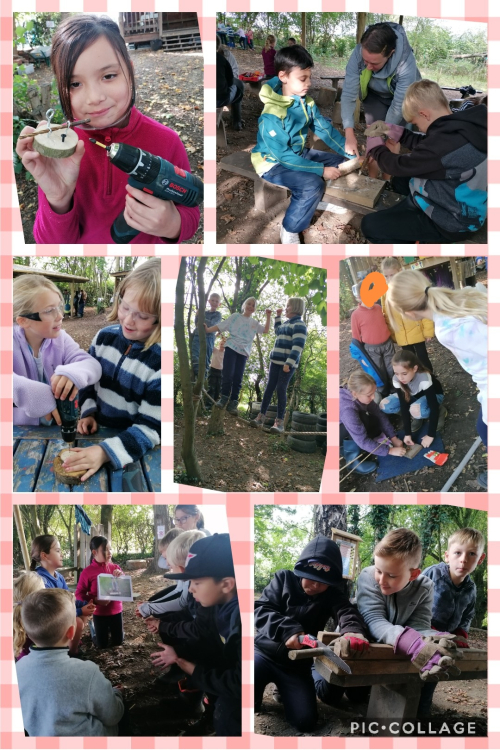 Posted by kilburnjuniorschool at 10:19 AM | Permalink | Comments (0)

First Week Back in Team Resilience

What a fabulous first week in Team Resiliece!

The year threes have settled in wonderfully and the fours have been so kind and caring, supporting the younger children and showing them around the school.

This week in Team Resilience we have kick started our topic with some fruit and bread tasting, have started our new class book 'The Great Food Bank Heist' and had some great discussions about where our food comes from and our human rights!

We are all looking forward to an exciting and fun-filled half term! Posted by kilburnjuniorschool at 7:51 PM in Team Resilience | Permalink | Comments (0)